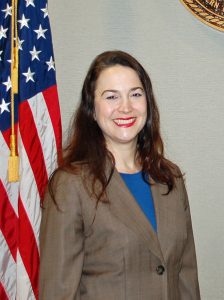 Allison Bushnell joined the U.S. Attorney’s Office in the Western District of Louisiana, Shreveport office, as an Assistant United States Attorney in 2005. In 2007, she was designated as one of three Organized Crime Drug Enforcement Task Force (OCDETF) attorneys in the Western District of Louisiana. She was designated Lead OCDETF Attorney in 2015. Although her primary focus is prosecuting narcotics trafficking, she continues to prosecute various types of cases from fraud to immigration violations.

Prior to joining the U.S. Attorney’s Office, she served as a law clerk to the Honorable S. Maurice Hicks, Jr., Federal District Court Judge in the Western District of Louisiana (2003-2005).  She also clerked for the Honorable Frank J. Polozola, Federal District Court Judge in the Middle District of Louisiana from 2001-2002.  In between clerkships, Mrs. Bushnell was an associate attorney in the Shreveport office of Lemle & Kelleher.  She graduated with honors from Louisiana State University Law School in 2001.

A proud graduate of Louisiana Tech University (1996), Mrs. Bushnell served as a board member on the Louisiana Tech Alumni Association Board of Directors from 2004-2009.

Mrs. Bushnell has two children ages 10 and 6. They reside in Shreveport, Louisiana.

Back To Opioid Summit

Northeast Delta HSA does not discriminate based upon age, disability, sex, sexual orientation, gender identity, race, creed, color, religion, political beliefs, veteran status, national origin, ability to pay, or any other non-merit factor. No one will be denied access to services due to an inability to pay; there is a discounted/sliding fee schedule available based on family size and income.